This remarkable continued growth and vast supply is having an impact on many values. Some of the recent volume-based limited releases are experiencing an accelerated ‘New Release Curve’ where the first few bottles sell for unsustainable amounts followed by an almost cliff-like drop. Ardbeg Kildalton Project peaked at £285 in August and now sits at around £160.

While three of the eight composite indices showed growth, none were exceptional. The significant fall in the RWPE Port Ellen Index was primarily due to the first release coming back from a £2,100 October peak and settling back down to £1,300 (equalling Septembers value). Early signs in December show this down-spike should be reversed, at least to some degree.

The three worst performing bottles in the RWIcon100 Index were –

The top three performers were –

Following Karuizawa’s ‘project Everest’ like growth over the last 6 months it was unsurprising to see some sort of pause for breath. That said, it is encouraging that prices remained broadly in line with previous highs.

Both Macallan indices are expected to soften further through December and, for the moment at least, we look to be at the top of values for the 25 year old Anniversary Malts. The 18 year olds have already seen a significant correction (Q1 this year) before rapidly regaining value so it appears Macallan 18’s are set for a bit of a lumpy ride. 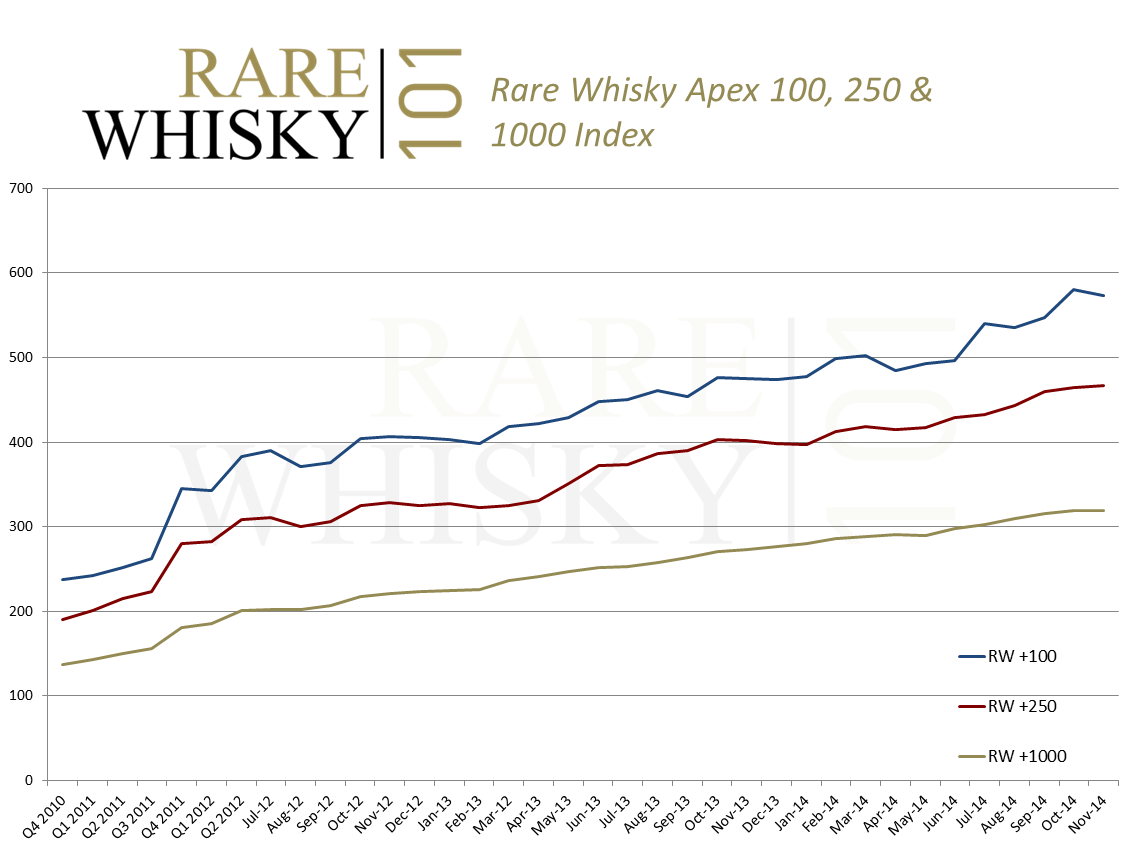 The Negative Indices, without exception, reached new lows. The Negative 1000 index breached 60 points for the first time, settling at 59.48, some 2.75% lower than October. 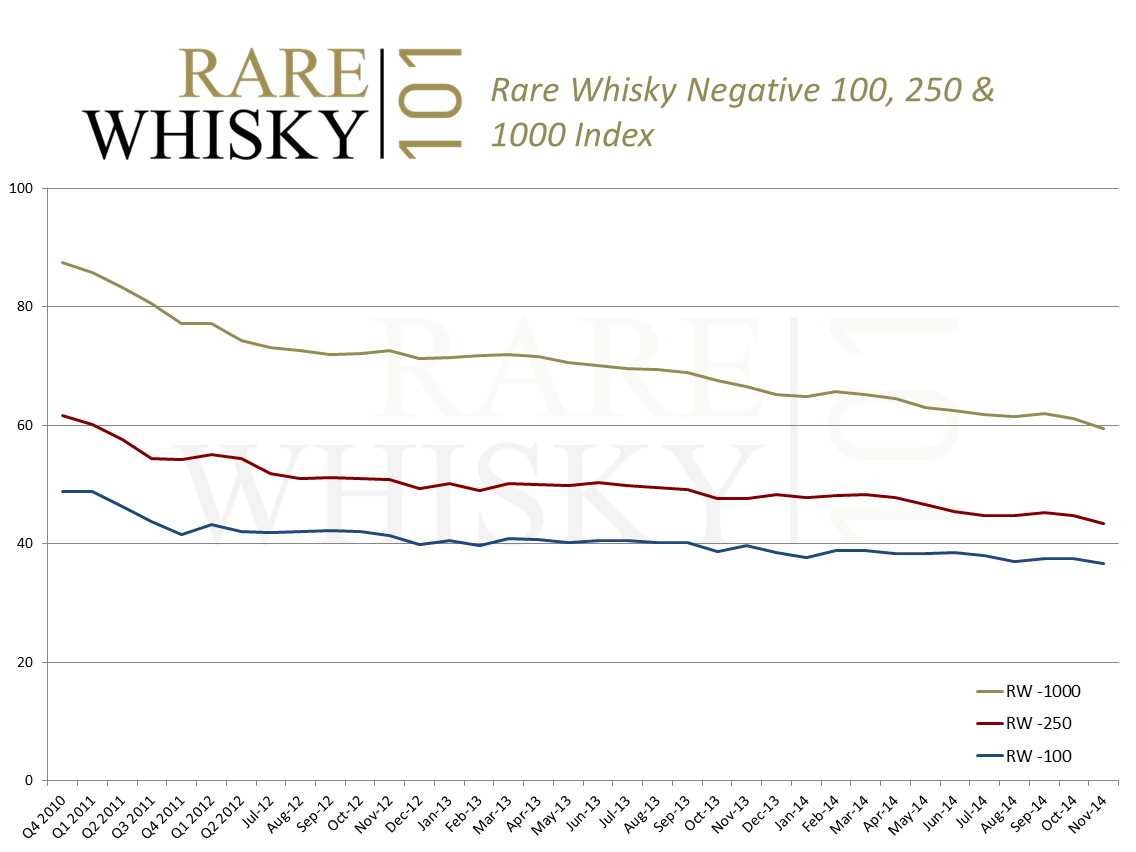 As referenced in last months update, Bruichladdich values stepped back even further, cementing what appears to be a significant re-trace. From a holistic distillery perspective (including all OB’s and IB’s), Bruichladdich values declined by a staggering 13.44%. The following index shows the performance of a collection of sought after OB rarities (including PC5, Octomore 01.1, all Legacy bottles, the 1970 and 1973 vintages plus others). 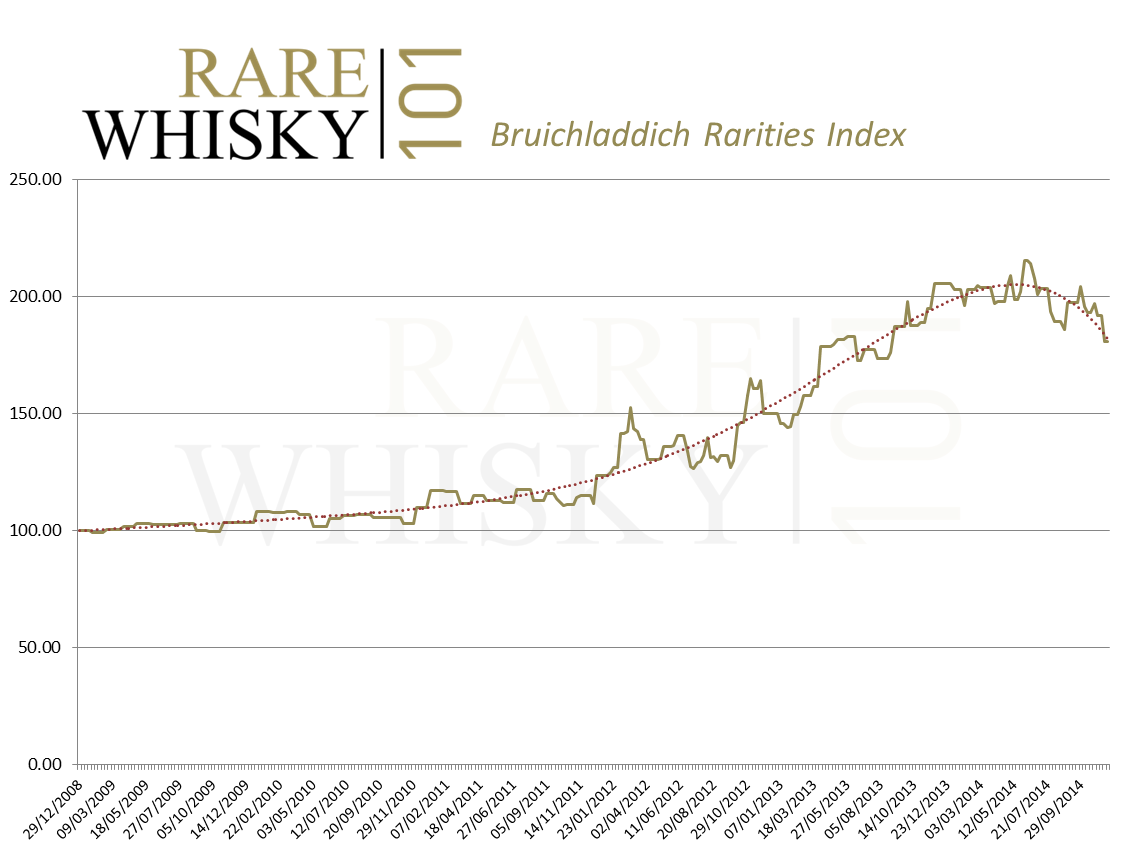 There’s clearly a leaning towards oversupply at the moment which is affecting certain high volume brands; however, we are seeing further significant differences in hammer price depending on where a bottle is physically sold. The main low-points (eg the Port Ellen 1st Release selling for £1,300) are being achieved at traditional auction houses rather than on-line. Lower prices and typically higher sellers fees asks the question (again) of the long term viability of traditional auctioneers selling whisky.

With less than one month to go until we close the book on 2014 it appears an element of instability has crept into the market.

December will be a crucial month…